AUX is a quintette from Kiel, Germany, that has shown its versatility ever since it has been founded back in 2008. Their first album ‘Pursuit of Progress‘ (2012) marks the cornerstone of their sound which is influenced by progressive, art and psychedelic rock.

Even after a reformation in 2014 the band hasn‘t struggled to continue working on their auditive vision. The music of AUX is dedicated to the spontaneity of improvisation, especially during their live shows. It strives to capture the magic moments that leave the audience equally mesmerized and shivering.

If there is one constant that can be found within AUX's music, it is contrasts: While they are nothing else but their musics blueprint, they unleash a swirling maelstrom that swallows the audience into the tension between harmony and disruption.There is a good case to believe that their upcoming second album ‘Troubadour‘ will again reveal another facette of the band. You don‘t want to miss December 2017 as the record will be issued on vinyl, CD and digital via Pink Tank Records!

AUX - TROUBADOUR (standard black) 12" vinyl record
PRESS RELEASE:   "...ranging in impression from the post-grunge hookmaking of “Fives” through bluesy classicism of “Deadly Rage” and into the garage foreboding moodiness of centerpiece “Filter” before the pair of 10-m ... (Read More)
15,00 €

Bees Made Honey In The Vein Tree

Bees Made Honey in the Vein Tree is a Psychedelic / Doom / Shoegaze band from Stuttgart, Germany. Founded in 2014, the contrast between bright and eerie, beautiful and heavy, quickly became an inseparable part of their sound. Their compositions combine crushing Doom riffs with spherical Shogaze, Post- and Psychedelic Rock. Underneath swims a layer of heavily reverberated vocals, that act as an additional instrument but also add a visual layer through the lyrics. In 2017 they released their debut record, which provides a diverse listening-experience and lays the groundwork for their continually evolving sound. In 2019 they tour in support of their sophomore record „Grandmother“ (Pink Tank Records) on which they expanded their sound through lower tunings, a densely layered use of effects, and faster passages.

BEES MADE HONEY IN THE VEIN TREE - MEDICINE (stand
PRESS RELEASE:     "Medicine works quickly in that song’s echoing spaces and those of the 10-minute opener “Every Night I Walk the Same Trail of Thought” to earn a place as one of the best debuts of the yea ... (Read More)
16,50 €

Founded 2008 in Heidelberg, Germany, the searing strings, swirling Hammond organ and pounding drums of Buddha Sentenza condensed rapidly to form a nebulous cloud of loosely jammed, spaced-out, rocking riffs. After releasing the demo "mode0909" in 2009 and their debut South Western Lower Valley Rock in 2013, Buddha Sentenza returns 2016 with their third longplayer Semaphora. Once again, the quintet honors their sonic heritage by comprising sounds from multiple corners of the rock spectrum, resulting in a perfect, modernized match of psychedelic, stoner and jam music.

After the collaboration with the vinyl release of "Riots In Jerusalem", the guys decided to join the Pink Tank family. We will release the upcoming album and a split vinyl, soon! Also BURN PILOT will join some Pink Tank Festivals this October.

CAMEL DRIVER is a three piece instrumental rock band from Kiel, Germany. Founded in 2012, they made their way through various stages in the region/area to become a respected live band. With an induvidual approach they combine finest desert rock sounds with raw metal influences and fine-tuned/hot oriental jazz parts. Inspired by the instrumental power of several bands, CAMEL DRIVER has gone deeply into versatile songwriting to create their own colorful and massiv sound landscapes. The three guys just finished the recordings of their self-titled debut album, which will be released on vinyl in autumn 2014 on Pink Tank Records!

The trio's second album \ / will be released in April 2020 and shows an incredible development in sound and composition that one would not have expected after the stunning debut album.

The first core of the band was born in the early ‘90s with the Paolucci Brothers: Stefano (Guitars-vocals) and Pierluigi (drums); after many line up changes LOST MOON became stable when Adolfo Calandro (bass) and Mauro Colloca (percussion) joined the band.The combo started working on their typical sound , a mix of heavy psychedelic stoner and hard tribal rhythms.

We're very proud that the Italian stoner rock legend is joining the Pink Tank! "Through The Gates Of Light" will release October 2017 on vinyl and CD.

LOST MOON - THROUGH THE GATES OF LIGHT (CD) jewel
THIS IS A PRE ORDER RELEASE DATE IS SCHEDULED FOR END OF SEPTEMBER/BEGINN OF OKTOBER   PRESS RELEASE:   LOST MOON is the Italian Dinosaur in stoner rock and heavy riffing. More than 25 years the guys o ... (Read More)
10,00 €

LOST MOON - THROUGH THE GATES OF LIGHT LP 12" (sta
THIS IS A PRE ORDER RELEASE DATE IS SCHEDULED FOR END OF SEPTEMBER/BEGINN OF OKTOBER   PRESS RELEASE:   LOST MOON is the Italian Dinosaur in stoner rock and heavy riffing. More than 25 years the guys o ... (Read More)
15,00 €

Through solar skies, three journey from the center of the earth to a time and space unknown....a place where the explosive sounds of heavy groove and psychedelic rock collide, to create a place just above the earth.....in LOW ORBIT.

Formed in 2013, LOW ORBIT emerged as the culmination of over twenty years experience in the Toronto hard rock, underground scene. The resulting birth is this power trio, who share a genuine passion for their craft, and who strive to play and create the heaviest music this side of the stratosphere.

Low Orbit's sound is a solar melding of psychedelic, stoner/doom, with a punishing downbeat groove. Relentless at times and ever so beautifully layered in its thick, retrospective laid back jams. This burning star consists of Angelo Catenaro on vocals/lead guitar, Joe Grgic on bass/space trips, and Emilio Mammone on drums. The band equally shares a love for this genre of music through their influences of like-minded bands. This is also evident through the gear they use: From 70's vintage heads, cabs and drums to current day instruments, the band takes their sound very seriously. Inspired by and created with a blend of modern day elements and days gone past, Low Orbit blends 70's psychedelic/classic rock with the fresh, heavy sounds of today.

In late 2014 the band released their debut self-titled, full length album. After a year of playing gigs around the southern Ontario region and getting great acclaims from within the Stoner/Doom circle Low Orbit is releasing a re-mastered version of its songs on Vinyl with their label PINK TANK RECORDS.

In 2017 LOW ORBIT will be back with SPACECAKE. Their second full leangth is scheduled for a proper vinyl, cd and digital release. Stay tuned...

LOW ORBIT - LOW ORBIT 12" LP (standard black) Viny
PRESS RELEASE:   "One of the best psychedelic stoner bands in Canada!“ (Beach’s Basement)   "All in all, Low Orbit is a really interesting debut outing from a band that just kind of came out o ... (Read More)
15,00 €

PFUND is a heavy music four piece from Kiel, northern Germany. This constellation exists since 2009 and the dudes gained - under different bandnames - some live experiences during the last 8 years.

The guys started as a straight heavy bluesrockband, they were influenced more and more by different music genres over the time. Now, PFUND developed and own sludgy style of stoner, doom and psychedelic. Still keeping some old influences but always tracing the trail for something new. In december 2018 the guys will release their first full lenght record under the flag of PFUND on Pink Tank Records. 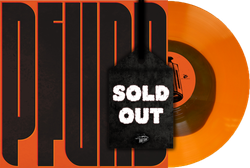 PFUND - PFUND (transparent orange with coloured ci
!SOULD OUT!  HERE YOUR GET THE BLACK ONE   PRESS RELEASE: PFUND is a heavy music four piece from Kiel, northern Germany. This constellation exists since 2009 and the boys gained – under different bandnames – so ... (Read More)
18,00 € 1 15,00 €

TESTOSTEROLL - BULLET RYE (CD)
PRESS RELEASE:   "...you should be checking out this crew, cranking their tunes, and thanking your lucky stars that there are still bands willing to put in the effort to get their music sounding so good. Get on it alre ... (Read More)
8,00 €

Formed in late 2017, WHITE NOISE GENERATOR are new to the Scene. They met at a spontaneous live Jam at a Birthday Party that Summer, and soon started writing Songs of their own. Currently finishing up their first Studio Album, the Band aim to combine Heavy Psychedelic Rock and Stoner to create a Full-Blast live Experience.

Deep, fuzzy Guitar Sounds and spheric Synth waves work together with tight, checked out Structures and doomy Rhythms. The album will be released in September 2019 with Pink Tank Records.

WHITE NOISE GENERATOR - DEAD LEAVES (blue transpar
PRESS RELEASE: Formed in late 2017, WHITE NOISE GENERATOR are new to the Scene. They met at a spontaneous live Jam at a Birthday Party that Summer, and soon started writing Songs of their own. Currently ... (Read More)
18,00 €

WHITE NOISE GENERATOR - DEAD LEAVES (standard blac
PRESS RELEASE: Formed in late 2017, WHITE NOISE GENERATOR are new to the Scene. They met at a spontaneous live Jam at a Birthday Party that Summer, and soon started writing Songs of their own. Currently ... (Read More)
16,00 €

2016 the three guys will be back with ORBIT DUALKRAUT which releases this August on limited vinyl, on CD and digital. This recording shows up that it is possible to create a new sound which we will call "Interstellar Psycho Doom“! Dark, heavy, massiv, fuzzy and psychedelic!

ZQKMGDZ - ORBIT DUALKRAUT (dualkraut clear) 12" V
PRESS RELEASE:   "If the EP was well-received with my fellow critics of the Doom Charts (reminding us of everything we loved about bands like Helmet and Kyuss), then I think the LP has every potential of blowing right ... (Read More)
16,00 €

ZQKMGDZ - DIMENSION PLASMA 12" EP (black vinyl)
PRESS RELEASE:   "Just sit back for this mammoth and insane song that will expand your mind for one final round. The fuzz is laid on nice and thick as ZQKMGDZ play at a slow pace before adding different sounds along th ... (Read More)
15,00 €