After the collaboration with the vinyl release of "Riots In Jerusalem", the guys decided to join the Pink Tank family. We will release the upcoming album and a split vinyl, soon! Also BURN PILOT will join some Pink Tank Festivals this October. 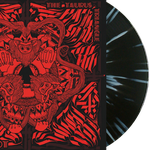