2016 the three guys will be back with ORBIT DUALKRAUT which releases this August on limited vinyl, on CD and digital. This recording shows up that it is possible to create a new sound which we will call "Interstellar Psycho Doom“! Dark, heavy, massiv, fuzzy and psychedelic! 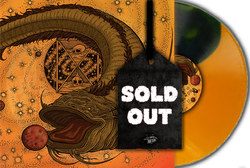